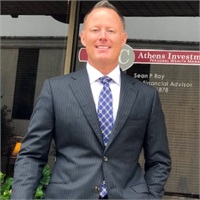 Growing up in a single income family of seven, Sean affectionately describes his childhood as being "financially challenged." Others would simply say "poor." Regardless of the characterization, he is proud of his upbringing and attributes it to his appreciation for hard work and his determination to help others pursue financial success. He likes to say that "money doesn't buy happiness, but it sure beats being broke."

Sean worked his way through college and graduated with honors from the University of Texas at Dallas with degrees in both Economics and Finance. He has always had a passion for money and investing. Sean began his career as Vice President of a small community bank, in 1993. His over 20 years of experience in banking and investing has allowed him to see and adapt to many different types of markets. Sean's post graduate academics include the attainment of an insurance license, a FINRA Series 7, Series 63 and Series 65, held with LPL Financial, as well as the Accredited Asset Management Specialist designation from the College of Financial Planning. Most recently Sean was named a Five Star Wealth Manager for 2016, 2017, and 2019. He has been recognized in Texas Monthly, Forbes, and the Wall Street Journal.

As an LPL Financial Advisor, and Founder and President of Athens Investment Center, Sean concentrates on building relationships with each and every client. He works hard to fully understand their personal financial needs and objectives. This allows him to customize wealth management strategies to suit both the short and the long term goals of his clients. He feels that after the proper plan is implemented, the key to success is consistent communication with each client. Even the best of plans have to be monitored and adjusted to address changing conditions in both the market and in life. According to Sean, "We know we will have hiccups along the way. Proper communication allows us to adjust and adapt accordingly."

Sean was born and raised in Tyler and married a "Brownsboro girl" in 2001. He and his wife, Sherry, along with their two children, Peyton and Tanner, live in Brownsboro and are active members of Rock Hill Baptist Church. He is proud of his family and his relationship with God. Sean passes along his life philosophy, "God first, Family second, Work third...everything else will fall into place."